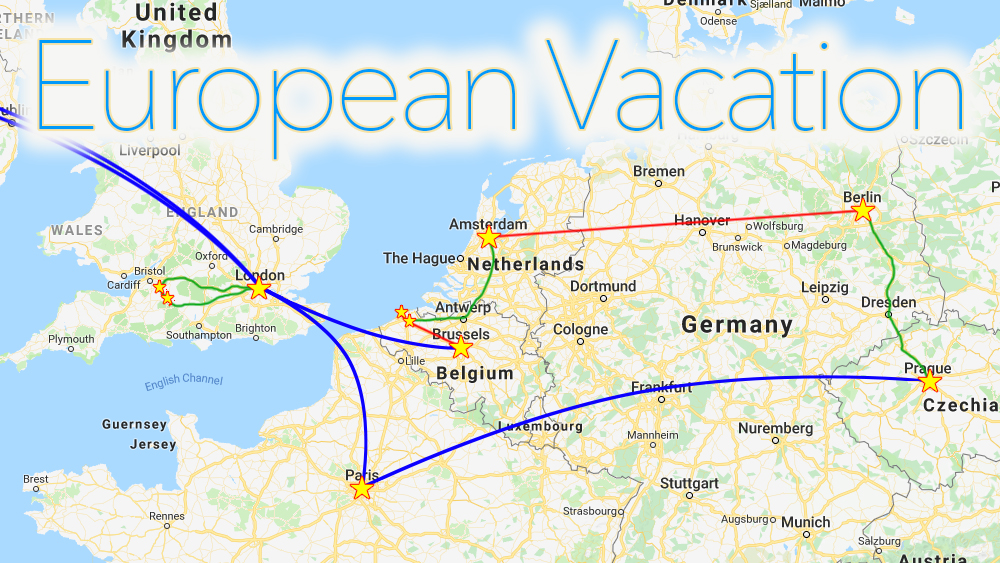 In fall 2018, Mr. Fool took Ms. Fool on a whirlwind tour of Europe. With only a loose itinerary in mind, and the first week’s travel and accommodations booked, we left LAX for Heathrow. Below are some of our trip highlights. Or click the city name to jump to that specific blog section: London: Part I, Paris, Prague, Berlin, Amsterdam, Bruges, London: Part II.

We stayed with two of Mr. Fool’s college friends. Though they have their hands full with two energetic little ones, they graciously let us share their flat for our first few days in London.

While there, we did a lot of walking (the October weather was pleasant, for the most part) and managed to see quite a bit. A few of the places we visited:

A few of our favorite London photos:

From London, we flew to Paris. Our very modest hotel was in Montmartre, right above the 9th district and steps away from a bakery whose chocolate and almond croissants we will forever remember. We started our trip by visiting one of the classic attractions: the Louvre. The next few days were a blur of running from place to place to take in things like:

Our sightseeing was peppered with frequent stops at various eateries. There’s nothing original we could say about the glorious Paris food scene. Ms. Fool’s one bit of advice: go to Ellsworth. She had her favorite meal of the trip there.

A few of our favorite Paris photos:

Prague’s architecture was charming. Our visit was not what we hoped, however, because of the throngs of visitors and many tourist-trap amusements. Still, we made the most of our time there, visiting places like:

A few of our favorite Prague photos:

Our Prague-to-Berlin bus took us through Dresden, which was leveled by WWII bombings. From the window, we saw some of the rebuilt structures.

Berlin gave us a nice chance to decompress after being trapped between groups of tourists all day every day in Prague. A few of the highlights from our trip:

A few of our favorite Berlin photos:

We watched the German countryside give way to scenic Holland, with its charming windmills, from a train.

Many of our acquaintances immediately think of the red light district when they think of their visits to Amsterdam. We think of the food and the architecture. We took in a good pancake breakfast in the smallest restaurant in Europe. We ate fried cheese and lots of fries. We had mouth-watering apple pie at Winkel 43. And we spent hours walking the streets so Mr. Fool could marvel at the crooked buildings. He could not stop taking pictures and pointing out how far over the water they leaned. (He later read that the houses had been built using poles pounded into the muddy ground. Some poles did not go deep enough, some were just too weak to support the structure, and some had rotted. All of these things can cause structures to tilt.)

Our visit to Amsterdam was short, and we had just enough time to see

A few of our favorite Amsterdam photos:

Living a Fairy Tale in Bruges

A bus took us to our final new city of the trip: Bruges. We stayed in the nearby coastal town Blankenberge, as it was only a 15 min train ride away and a lot cheaper.

We both loved Burges. The crowds were smaller and the centuries-old buildings well-preserved. It was like walking around in a medieval fairy tale city…but one with plenty of artisan chocolate shops, which Ms. Fool loved. Over the course of a few days, we crisscrossed the city  to see everything we wanted. Highlights included:

A few of our favorite Bruges photos:

After having near-perfect weather our entire trip, we headed back to London for a final few days.

For our first day back in the city, we booked an early-morning tour to see Stonehenge and Bath. Stonehenge was predictably crowded, but we enjoyed seeing the storied stones in person. Bath was likewise crowded. We had to push and shove our way though The Roman baths, as the museum was not built to handle the high number of people. Regardless, we enjoyed seeing that part of history.

We capped off our final day in London with afternoon tea at The Wolsley. It was fun experience, and it left us with a new appreciation for clotted cream and scones. After our repast, we tried to burn off some of the calories by walking to Abby Road and then Baker Street.

Our final days in London included:

A few more of our favorite London photos:

We spent a total of 22 days on this trip, walked around 161 miles, and hiked up 325 flights of stairs. We somehow had great weather, never got sick, and never missed a flight, train, bus, ferry or any other form of transportation we took. The only “mishap” was Mr. Fool lost a plug converter.

When we return, we plan to rent a car and skip the big cities in favor of smaller towns.