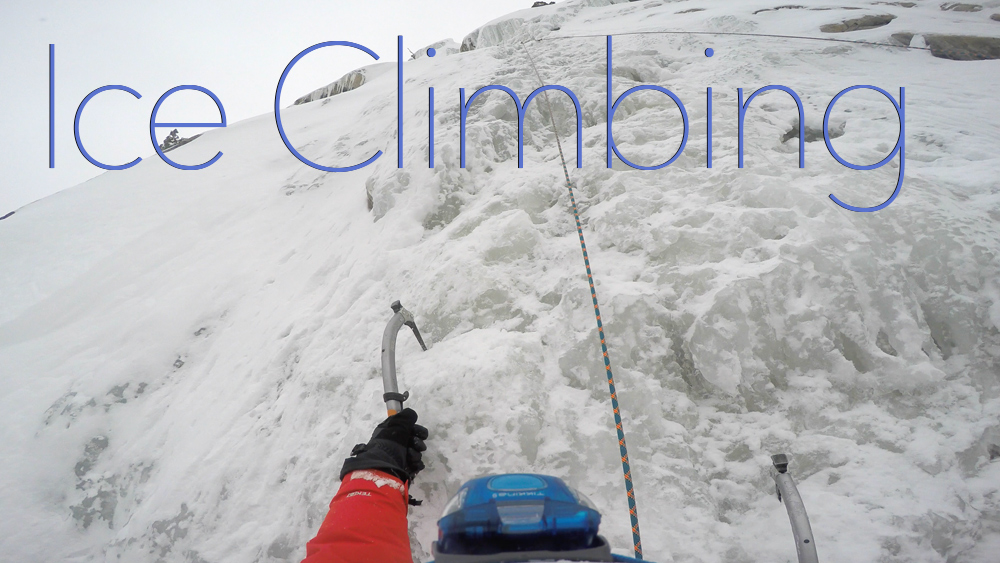 After signing up for “An Introduction to Ice Climbing” through the Sierra Mountain Center, we packed our winter gear and headed to June Lake, CA. The drive was intense: our route led us into a raging blizzard with winds over 35 mph and an expected snowfall of up to 5 feet. There were moments of whiteout, and ice and snow all over the road. We got lucky just before our destination and followed a snowplow directly to our cabin.

The next morning, at the crack of dawn (well, 6 AM), we dragged ourselves out of bed and met up with the rest of our group. The storm had dropped another foot of snow while we slept, but our instructor was optimistic that we would be able to reach our climbing destination.

At the trailhead, we parked the cars, grabbed our gear, and started to trudge though the deep snow. We hiked up a steep hill for about two hours before the snow became chest-deep, and we had to turn back down. Luckily, there was a backup climbing wall at a lower altitude that we could use for the day.

Once we made it to the alternate location, the instructor set up some anchors, acquainted us with the gear, demonstrated proper climbing technique, and put us on the wall.

Mr. Fool’s first climb was hellish on his calves due to poor technique. He quickly adjusted his approach, and his subsequent climbs were much better. He made it to the top of the wall on all his turns.

Ms. Fool struggled on her first climb. Used to relying on rock climbing technique to make her way up walls, she struggled to remember proper ice climbing form. It took a few tries for her to top out.

Wet and shivering after several hours of climbing, we called it a day.

The next morning, we attempted to reach our original ice wall destination, this time equipped with snow shoes and avalanche beacons. The hike was much more tolerable in slightly warmer conditions, but still rough. Halfway up, we passed a deer that was too exhausted to try and run from us. Its head hardly reached above the snow.

Around 11 am, we reached our destination but were disappointed to find the conditions unsafe for climbing. There was water moving behind the wall, deep snow, and some other issues.

We were supposed to learn how to lead climb. Instead, we spent most of the day studying snowpack and practicing avalanche rescue.

That day ended up being a little bit of a bust but still fun.

Check out the video below to see the highlights of our trip.

Video of our ice climbing trip to June Lake: